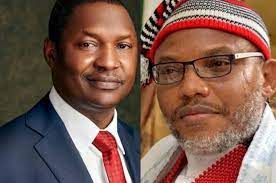 The Attorney General of the Federation and Minister of Justice, Abubakar Malami, has met with the legal team of the apex Igbo socio-cultural organization, Ohanaeze Ndigbo, on the leader of the Indigenous People of Biafra (IPOB), Nnamdi Kanu.

The Special Assistant on Media and Public Relations to the AGF, Dr. Umar Gwandu, disclosed this in a statement on Monday in Abuja.

Malami said the Ohanaze’s position on the Kanu’s issue had shown the group’s commitment to the Nigerian project.

He expressed hope that the group would be open-minded and guided by the rule of law when they convey the court’s judgment to their people in their local dialects.

The AGF said: “The group showed a mature departure from the mindset of the proscribed Indigenous People of Biafra by denouncing the use of any form of violence while channelling concerns and presenting demands.

“By urging the youths to be law-abiding and sheath their sword as well as asking them to try to obtain a voter’s card to enable them to contribute to national development, the position of Ohanaeze becomes glaringly constitutional and commendable.”

The IPOB leader was arrested by security agents in an unnamed country on June 27.

He is currently standing trial for alleged treason and other allied crimes at the Federal High Court, Abuja.