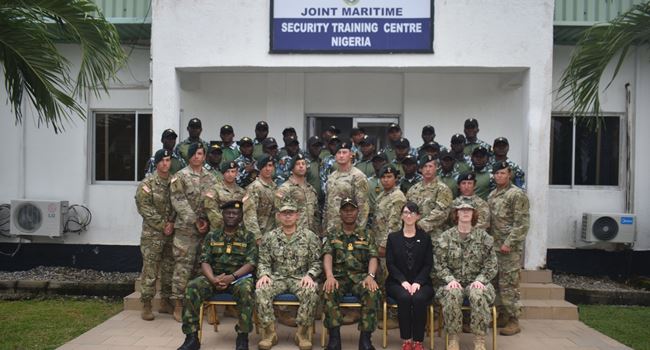 Officers from the Nigerian Navy’s Special Boat Service have completed a five-week Joint Combined Exchange Training (JCET) with a team from the United States Army Special Forces in order to safeguard the security of Nigerian waterways from illegal and uncontrolled operations such as trafficking and piracy.

The exercise is part of a series of U.S. engagements with the Nigerian military that provide opportunities for Nigerian military and U.S. elite units to work together, learn from each other, and strengthen relationships.

According to a statement made sited by AbiaPulseNews from the US embassy, throughout the JCET, the American military trainers and the Nigerian Navy special operations forces trained together on a broad range of land-based skills and tactics, such as countering improvised explosive devises (IEDs).

Part of the statement reads: “The magnitude of this summer’s engagements demonstrate the strategic importance of the United States-Nigeria bilateral relationship: the U.S. is delivering A-29 SUPER TUCANOs as part of the largest defense sale to an African country; the United States Navy, Coast Guard, and Marine Corps are scheduled for extensive programs in Nigeria beyond pre-COVID levels. These engagements build on a longstanding security partnership, particularly in the Gulf of Guinea.

Acting U.S. Consulate Political and Economic Chief Merrica Heaton was quoted as saying that the U.S. government works closely with all the services of the Nigerian military to provide technical assistance, equipment, and professional exchange and training opportunities.

According to her, the JCET is part of a close and continuous military partnership between the United States and Nigeria spanning decades to strengthen defense ties and promote regional security.

“The United States Mission to Nigeria is a steadfast partner — helping combat maritime crime in the Gulf of Guinea, counter violent extremists in the Northeast, and enforce the rule of law throughout the region,” Heaton added