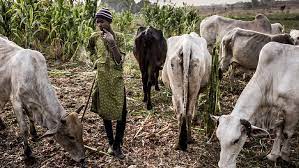 The Director, Department of Animal Husbandry Services, Federal Ministry of Agriculture and Rural Development, Winnie Lai- Solarin, has said there are Nigeria has 415 grazing reserves in 21 states, 141 gazetted.

However, of these 415 grazing reserves, only two are in the South— one each in Ogun and Oyo; 141 are gazetted, and this 141 that are gazetted are about 2.7 million hectares of land.

All the grazing reserves cover 4,275,326 hectares of land, and the National Grazing Reserve Law is of 1965

This is just as Senate spokesman, Dr. Ajibola Basiru (APC, Osun Central), said yesterday that there was no law on grazing routes in any part of Nigeria.

He said the law on grazing reserves, recognised as a state law in the 1999 constitution, actually criminalised open grazing.

Ajibola gave the clarification in a statement, titled: “No Law of Grazing Routes in Nigeria: Either North or South.”

Malami had in his reaction to the ban on open grazing by southern governors, said the ban was unconstitutional, adding that open grazing in Nigeria was backed by law and gazetted.

Meanwhile, 21 months after the Federal Government launched the National Livestock Transformation Plan, NLTP, that would have helped in addressing the herders/farmers’ crises, some of the willing states are yet to receive the counterpart funding from the government..

This came as the Director, Department of Animal Husbandry Services, Federal Ministry of Agriculture and Rural Development, Winnie Lai- Solarin, confirmed that there are 415 grazing reserves in 21 states of the federation, of which 141 are gazetted (1965 Grazing Reserves Law).

Only Oyo (two reserves) and Ogun (one ungazetted reserve) have grazing reserves among the 17 states of Southern Nigeria.