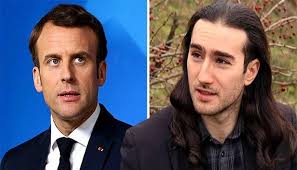 He acknowledged hitting the president with a “rather violent” slap.

“When I saw his friendly, lying look, I felt disgust, and I had a violent reaction.

“It was an impulsive reaction . . . I was surprised myself by the violence.”

He said he and his friends had considered bringing an egg or a cream pie to throw at the president, but they dropped the idea and insisted that the slap was not pre-meditated.

“I think that Emmanuel Macron represents the decline of our country,” he said, without explaining what he meant.