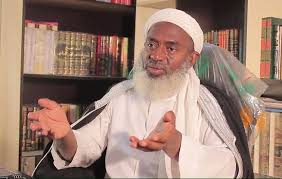 Northern Islamic scholar, Sheikh Ahmad Gumi, has criticised politicians for their display of wealth amid the widespread poverty in the country during the wedding of President Muhammadu Buhari’s son, Yusuf, in Kano State.

Gumi, who stated this during a sermon at the Sultan Bello Mosque in Kaduna on Sunday, likened the politicians to bandits stating both have taken advantage of Nigerians to live life of opulence.

The cleric also wondered where they got all the money they displayed at the wedding, if not from the public purse.

“Umar bn Khattab once took 16 dinar, which is equivalent of N2,040,000 today, from the treasury as estacode to Hajj. After their return, Umar admitted to Abdallah that they wasted public funds. Somebody told me private jets in Nigeria were all hired for the wedding of Buhari’s son.

“Some people are in captivity in the bushes and cities. Hunger is everywhere. People are facing all manner of problems, yet politicians spent public funds on private jets,” he lamented.