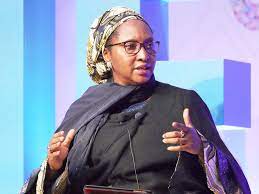 The Federal Government has explained why the Nigerian currency was devalued again, the third time in just a year.

According to Zainab Ahmed, Minister of Finance, Budget, and National Planning, one of the reasons is that foreign portfolio investors were unwilling to return to the Nigerian market due to the valuation of the Nigerian Naira which they believe is overvalued.

Zianab noted this during her presentation of the 2022-2024 Medium Term Expenditure Framework and Fiscal Strategy Paper (MTEF/FSP) last week.

She also pointed out that Nigeria’s exposure to risk aversion in the global capital markets put further pressure on the foreign exchange market resulting.

“In response, to the developments affecting the supply of foreign exchange to the economy, the Central Bank of Nigeria (adjusted the official exchange rate to align with the NAFEX rate, currently N410.15 /US1,” she explained.

Ripples Nigeria can confirm that in the last 14 months Nigeria’s currency has been devalued officially three times.

The first adjustment on Naira occurred in March 2020, when the CBN moved the official exchange rate from N306/$1 to N360.

The most recent is the introduction of the NAFEX rate as the official exchange rate in an effort to gradually unify the country’s various currency rates.

However, not much success has been accomplished since speculators have responded to the implementation of the NAFEX rate by crashing the black market rate by more than 10 percent.

The official currency rate at the end of trade on Friday was N411.25 to the US dollar, but the unofficial market rate was N503.00 per $.

This means that the difference in parallel market NAFEX rates at the close of Friday’s trade is N91.75 against N75.75 on May 25.