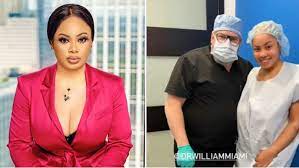 Former Big Brother Naija housemate, Nina has published a video on social media where she revealed to her fans that she has undergone cosmetic surgery.

The reality star revealed that she has now joined the ever-growing list of female celebrities who are undergoing body enhancement surgeries.

In the video that surfaced online, Nina was accompanied by another Big Brother Naija alumna, Khloe, who confirmed in 2020 that she also went under the knife.