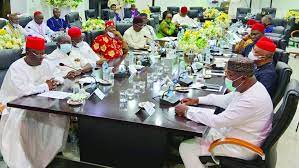 In a communiqué issued at the end of their meeting in Enugu and signed by the Chairman of the South-East Governors Forum, Dave Umahi, the leaders said the groups do not speak for the people of the zone.

The meeting was a follow up on the earlier consultation with a presidential delegation led by the Minister of Defence, Major General Bashir Magashi (retd), on the worsening insecurity in the South-East.

The leaders condemned the attacks on the Federal Government’s facilities in the region and urged the security agents to desist from killing Igbo youths, and respect their rights.

They assured Nigerians living in the South-East of their safety in the region.

The leaders also charged governors of states in the Northern part of the country to protect the Igbos in the region.

The communiqué read: “We the Igbos do reaffirm our commitment to one United Nigeria under a platform of justice, equality of rights, fairness, love, and respect for one another.

“We condemn the killing of security agents, the burning of strategic infrastructures, and killing of civilians in South-East and even in other regions. We request our security agencies to please discharge their duties within the rules of engagement and the law.”

The meeting was attended by governors Ifeanyi Ugwuanyi (Enugu), and Okezie Ikpeazu (Abia) while Imo and Anambra States were represented by their Deputy Governors, Prof. Placid Njoku; and Nkem Okeke; respectively.