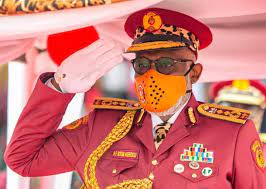 Ondo State Governor, Oluwarotimi Akeredolu, has inaugurated 500 fresh Amotekun intakes for batch B just as he said crime is a local issue that should be addressed with a “large dose of home-grown content”.

The Governor noted that the Amotekun Security Corps initiative is a baby of necessity conceived as a home-grown approach to solving the plethora of security challenges that have put the people on the edge.

The event was part of the activities marking the first 100 days of Akeredolu’s second term in office.

The governor also commissioned 20 new patrol vehicles to boost the operations of the state security network.

He unveiled the Roadmap to Internal and Border Security in Ondo State, assuring that, “the state shall become the safest and most secured in the country if the strategies contained in the roadmap are religiously implemented.”

He said Amotekun’s impact had been remarkable, adding that the security outfit had also given the people of the state hope in the management of security, despite that it came into being just a little over a year ago.

“It has further reinforced our long time view that State and community-based policing is the panacea to the country’s security challenges.

“Let me reassure the good people of Ondo State that our administration will leave no stone unturned as far as the implementation of our ‘Redeemed Agenda’ is concerned.

“The sixth goal of the agenda which is ‘Maintenance of Law and Order for Adequate Security’ is the reason we are here today.

“I enjoin all the good people of Ondo State to lend your cooperation in terms of providing credible intelligence and financial support towards the success of this initiative.

“Today’s event is one of the milestones recorded by our administration in our attempt to redeem Ondo State from the shackles of poverty, disease, and underdevelopment.

“These cannot be achieved without a sense of safety and peace,” Akeredolu said.

He commended the leadership of the security agency for the brilliant work put into the roadmap, promising that he would always provide the right leadership for the agency to flourish.